Family fishing trip one for the memory banks

Over the last number of years, our family has always tried to plan one fishing adventure a year. This summer I offered them several options, including a fly-in fishing trip. When the vote was tallied, everyone wanted to experience being in a place more remote. My son Kristjan was the only one who had been on a fly-in before.

I talked to friend Joe Hnatishin who runs Wallace Lake Lodge and Outposts if there was something available. For years I had wanted to return to Carroll Lake, which is located on the Gammon River system. Joe, along with his brother and their father James, had built a new outpost cabin there a few years ago. They constructed the log cabin from wood that was available in the forest around them. This impressive structure also included a hardwood floor. As luck would have it, in a year with COVID-19 stopping U.S clientele, the cabin was open for the August long weekend. I quickly booked the trip and started planning.

Carroll Lake is located within Woodland Caribou Provincial Park. It lies within the Nelson River drainage basin, which is part of the Arctic Watershed. All water flows westward into Lake Winnipeg and the Nelson River, then eventually north to Hudson Bay.

The many waterways and lakes are a mecca for those who like to trace the steps of fur traders who lived here, and First Nations people from this part of the world. There are more than 2,500 kilometres of waterway to paddle if you include Atikaki Provincial Park, located in Manitoba.

Carroll lake supplies anglers with an incredible diversity of structure and places to wet a line. It would be easy to get lost if you didn’t take special note of direction. Luckily for us we made sure each boat was equipped with electronics that included GPS tracking. My Helix 5 is perfect for a fly-in trip, especially rigged with a Lithium 7-amp battery. It is lightweight and loaded with a zero lines card that also shows the outline of the lake you are fishing. Don’t rely too much on this though — the map we had of Carroll on the chart was totally off.

With the fear of getting lost behind us we spent a wonderful three days exploring the myriad bays, narrows and islands.

One of the highlights of the trip occurred the second morning when my son Kristjan spotted a young woodland caribou running along the shoreline near us. It was exciting to see how beautiful this animal was. Unfortunately, we didn’t get close enough to get a picture of this rare sighting.

On the first couple of days of our trip we got rained on a few times. The first two times we did not have our rain gear in the boat. That made finding dry clothes a bit of a chore, but we never left home without after that.

How was the fishing? I would put it as interesting. We didn’t really find the walleye in spots that you would consider middle-of-the-summer areas. They were not stacked up on deep reefs or points. They did move into necked down current areas in the evening and supplied some incredible action. The biggest walleye of the trip measured in at 66 centimetres. This was caught by my daughter’s partner Brodie Green. He has a habit of catching big fish and this walleye was no exception He also caught the biggest pike on the trip.

We did spend some time trying to catch a large pike with limited success. Funny thing, it helped us fine-tune the walleye fishing. On the third morning we were in a large bay casting for pike when I spotted several marks on my Helix 5 that looked like walleye. These fish were in three metres of water off a deep cabbage patch. I quickly grabbed my walleye rod rigged with a jig and Berkley flatnose minnow. Bam, fish on. After that it was non-stop action for a half-hour. I spent most of it netting walleye for my wife and son. It was the best action of the trip and we ended up catching a pile of fish all day long.

While the Carroll Lake outpost is on the Manitoba side of the border, most of the lake itself lies in Ontario. This requires both Manitoba and Ontario licences depending on where you fish.

Ontario Conservation licences, which we had, allow you to keep two walleye smaller that 46 centimetres.

During our time there we had two meals of fish and the biggest hit of the weekend was when we made fish tacos. My wife Thora whipped up fresh pineapple salsa, guacamole, cabbage, along with a yogurt, lemon, sour cream sauce to go with it.

We flew into the lodge from Bissett with Bluewater Aviation. This airline has a fleet of Otter aircraft that makes the journey an extremely enjoyable process. It is only a 15-minute flight to get to the lake and we were able to take a lot of gear on this workhorse. If you have never gone to a remote outpost, it is an experience you will never forget. Go with family and friends and spend some special time together. Manitoba has some of the best lodges in the world. It’s time to give them a try.

WRITE US A GOOGLE REVIEW 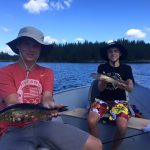 An opportunity of a lifetime!Wallace Lake Blog 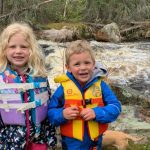